I am pleased to launch my first CrowdPatch.com project in a very timely way… crowd funding the production of 2 World War I books!

Our goal is to raise £350 to cover the cost of publishing the final 2 books in his series.

Visit John’s Crowd Patch for this project and join in if you feel you’d enjoy the books… or a friend would!

Abela publishing is a social enterprise publishing folklore, fairy tales, myths, legends, children’s stories and other forgotten and unavailable books. 33% of the net profit from each book published is donated to a charity, school or worthy cause – in this case the Royal British Legion.

What is the project?

During World War I, no cartoonist exercised more influence than Louis Raemaekers of Holland. Charged by the Germans with “endangering Dutch neutrality,” his cartoons led the German Government to offer a 12,000 guilder reward (US$250,000 today) for his capture, dead or alive. A German newspaper, summarizing the terms of peace “Germany would exact after it won the war, declared that Indemnity would be demanded for every one of Raemaekers’ cartoons.”

Raemaekers cartoons were also instrumental in fighting against deeply entrenched American isolationism. When, in 1917, the United States entered the war, Raemaekers embarked on a lecture tour of the USA and Canada, rallying the new allies for support and arguing the case for mobilisation against the German Empire. The Christian Science Monitor (USA) commented “From the outset his works revealed something more than the humorous or ironical power of the caricaturist; they showed that behind the mere pictorial comment on the war was a man who thought and wrought with deep and uncompromising conviction as to right and wrong.”

33% of the net profit from the sale of this book will be donated to the Royal British Legion. Volumes 1 and 2 have already been published, as has Poems of WWI, and all three are already contributing to this cause.

The £350 will cover the cost of publishing these two volumes bringing the complete set to 5 volumes. The previous books can be seen here…

DO YOU WANT TO BE PART OF JOHN’S CROWD FUND?
Review, sign up and make your funding choice…

THANK YOU CARD
Amount Contributed: £ 5.00
Description: Each book costs around £2.80 to produce, then we have £3.40 to post… so for a £5 contribution to help us produce the two books, we’ll send you a thank you post card with a cartoon & a poem on it… after postage, production & paypal charges around £3.50 will go into the production fund… getting us 1% of the way there… thank you.
Quantity: 50

COPIES OF BOTH BOOKS
Amount Contributed: £ 20.00
Description: This allows us to post you a copy of each of the new books once produced and put around £11 into the production fund… 3% of the way there… thank you.
Quantity: 20 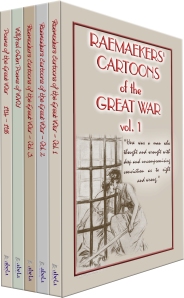 One thought on “Crowd Funding World War I history books”