I’m not sure what my human rights are on this but surely seeing Mark May coming at you through the pages of LinkedIn could be considered adhering to abhorrent, bordering on torture in some parts of the world!

First time I met Mark May was at an FSB Dinner where I had been voted in as Chairman of East Berkshire for my 1st of 5 terms in office and I’ve not been able to get away from him every since!

That night he was trying to sell me on the benefits of another networking group that will remain nameless, cheeky sod, this was my celebratory dinner and at least he listen after I fired a warning shot across the table… some other bloke didn’t and it got messy!

Now, almost everytime I endorse someone for something on LinkedIn… and as part of my New Year bon vivant I figured giving a few folk a small salute as I visited their profile was a great way to begin… now it’s turning into a nightmare…

When you endorse someone on LinkedIn you are then encouraged to endorse others… like I have time to spend for this! As I visit their profile fine, but a constant stream… give me a break… it asks…

What skills or expertise do your other connections have?

Does Mark May know about Property Management?
Probably, he’s spent the last 20 rattling on about it to anyone who will listen…

Does Mark May know about Residential Homes?
HE SHOULD! 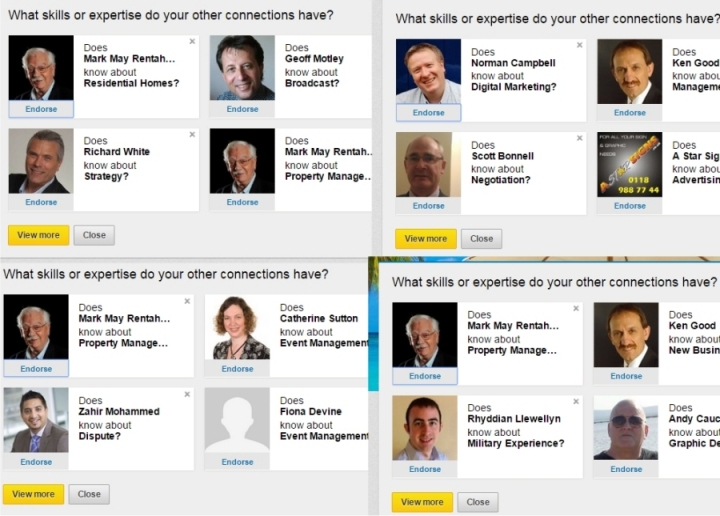 3 out of the last 4 endorsements have brought up Mark May as one of four others to endorse… one even had him twice! Ken Good seems to have taken over on the last flag… is it the tash 😉

Happy New Year you old bugger… like this story if you like Mark May but remember he’ll see who you are… so if you’re not liking him I can’t be responsible for his reaction… sensitive chap, best like!

P.S. Found the cure… just endorse him… my screen is clear… no more sleepless nights… done!

One thought on “YOU WILL endorse Mark May!”